This not so traditional chocolate hazelnut babka with cream cheese glaze is the perfect sweet bread for breakfast or dessert! Don’t let the steps and time frame scare you in this recipe. It’s not as difficult as it seems. With a little patience and know how, this chocolate hazelnut babka can be on the table in less than 24 hours and has just enough elegance to impress just about anyone at your next brunch! 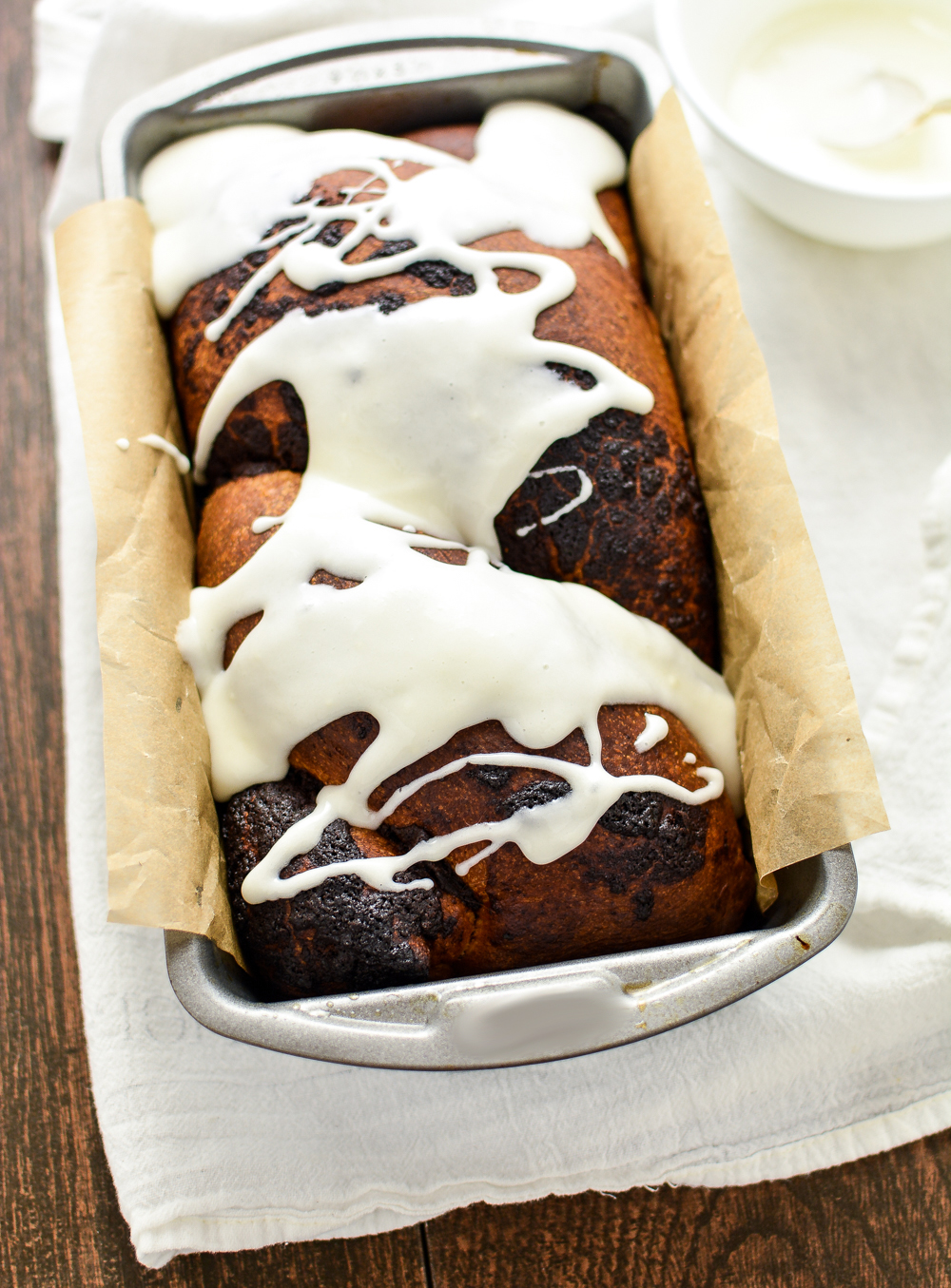 I used to devote just about every Sunday to hanging around the kitchen. I would cook, prep and eat my way into oblivion. When we moved into 2016, I made it a goal to try to stay out of the kitchen on the weekends where work was involved. I would get everything I needed to get done for the next week the Thursday and Friday before. If I were to spend any time in the kitchen, it was going to be for recipes that were not blog related. I would cook because I just felt like cooking.

For the most part, this plan has worked out beautifully. Well, it was working out until this chocolate hazelnut babka came along. This is a recipe that I literally spent an entire weekend trying to perfect, and I think I finally have perfected it! 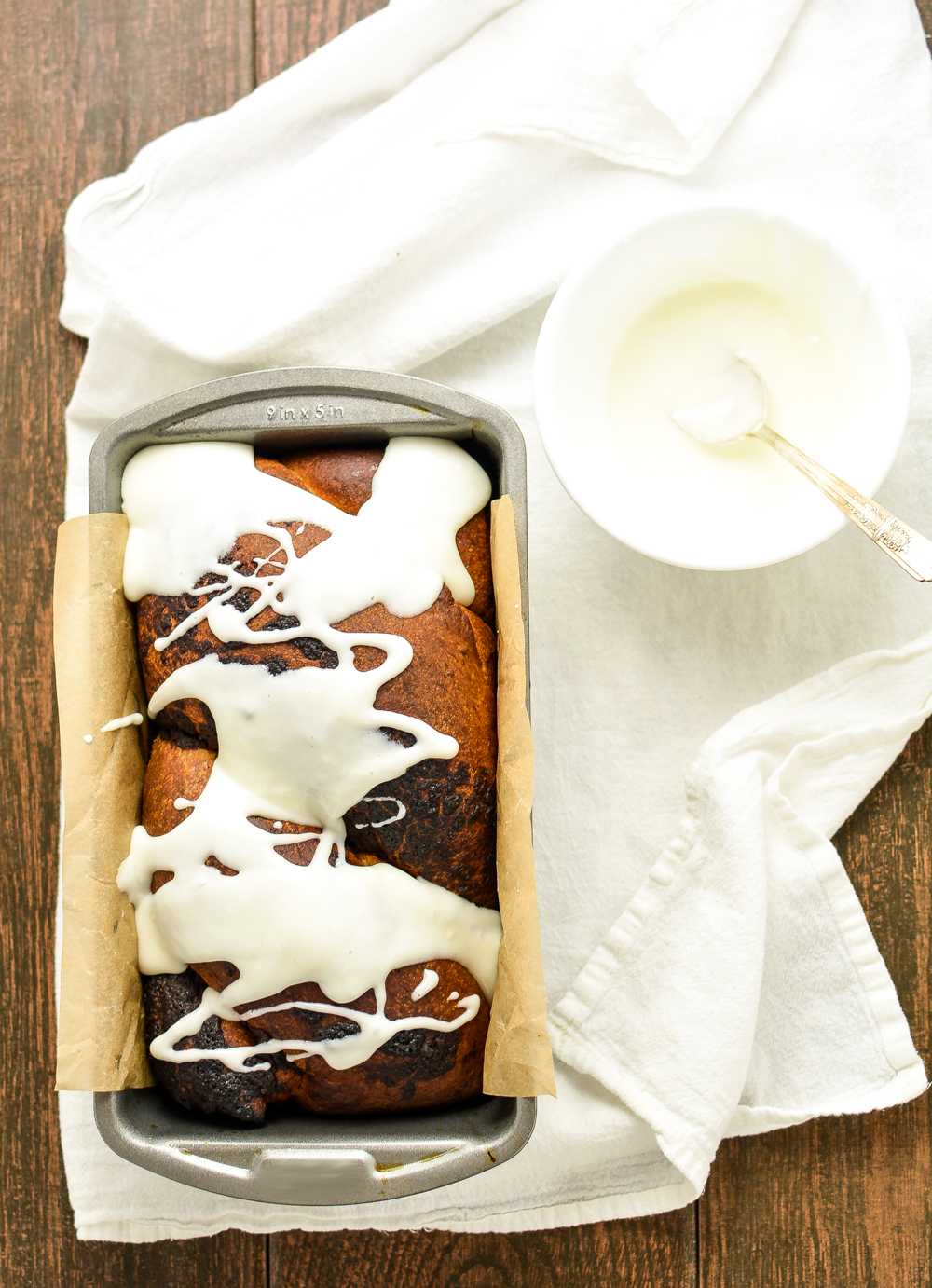 Oh sure, I’ve made a babka or two in my day, and I’ve definitely eaten my fair share of them. Hey, I spent most of my childhood in the NYC/Philadelphia metro area. Babka grows on trees out there! I swear it! When I moved out west to Denver metro, I basically gave up on baking bread. I had such a hard time baking anything at 5200 feet, and I’m not the most patient person in the world, so I basically gave up baking things like bread for a good year or so. I eventually got out of this stubborn-like mentality and tried again. I eventually perfected it.

Fast forward 3 years, and we moved to Wyoming where I now live at 7500 feet. I had to start the entire process over again. What I was doing in Colorado wasn’t working here. I felt like my bread would never rise, or it would literally take days (I’m not kidding you…DAYS) for any of my breads to rise. By that point, the top had dried out and I would be in a serious fit of rage. I gave up on bread again for a few months. Then I discovered this magical thing called “rapid proof.” The most amazing setting on my amazing oven, and it worked! … and I had bread … and all had rejoiced! 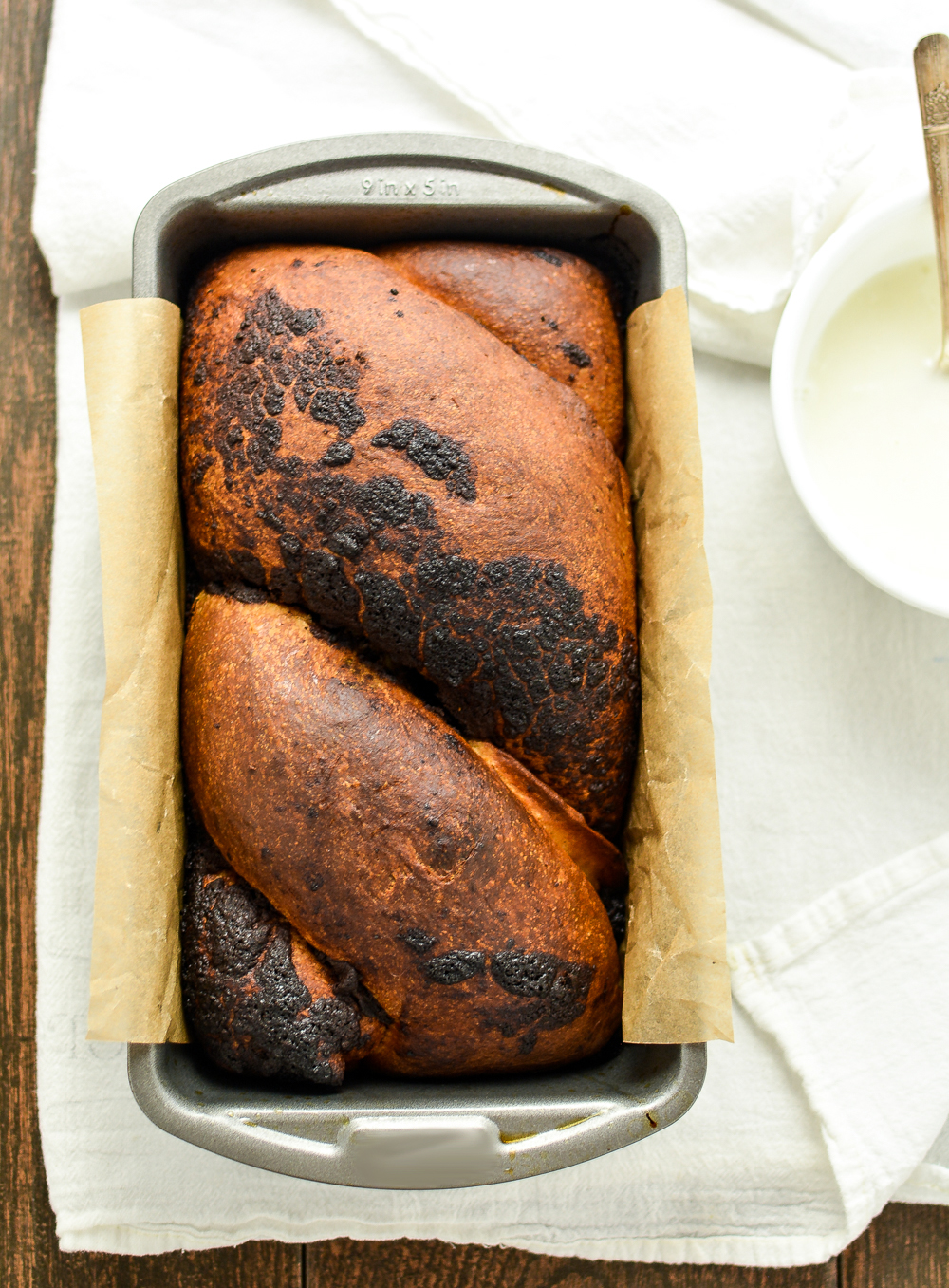 Since then, I have been on kind of a psycho bread making kick. Like I can’t stop…and I won’t stop because bread is literally my favorite thing on the planet. This chocolate hazelnut babka is one of the first recipes I will be sharing with you. I’m basically obsessed with it, and I’m sure that I’ll get some backlash from my BFFs in the NY/NJ area (you know who you are) using a cream cheese glaze (instead of the traditional) and that chocolate hazelnut (let’s be honest…it’s Nutella) filling instead of a traditional chocolate or cinnamon, but I had to put my own twist on it. Twist I did and all was right with the world.

This chocolate hazelnut babka is one of my favorites, and I hope you guys enjoy it as much as I do! Pair it with a chocolate stout! The chocolate bitterness from the beer will really highlight the sweet chocolate flavor in this babka.

P.S. As I was recipe testing and writing up this recipe in this post, I realized that this post really needs step-by-step photos. I am going back and redoing it in the next week or so, so at this point the recipe should be much easier to follow. 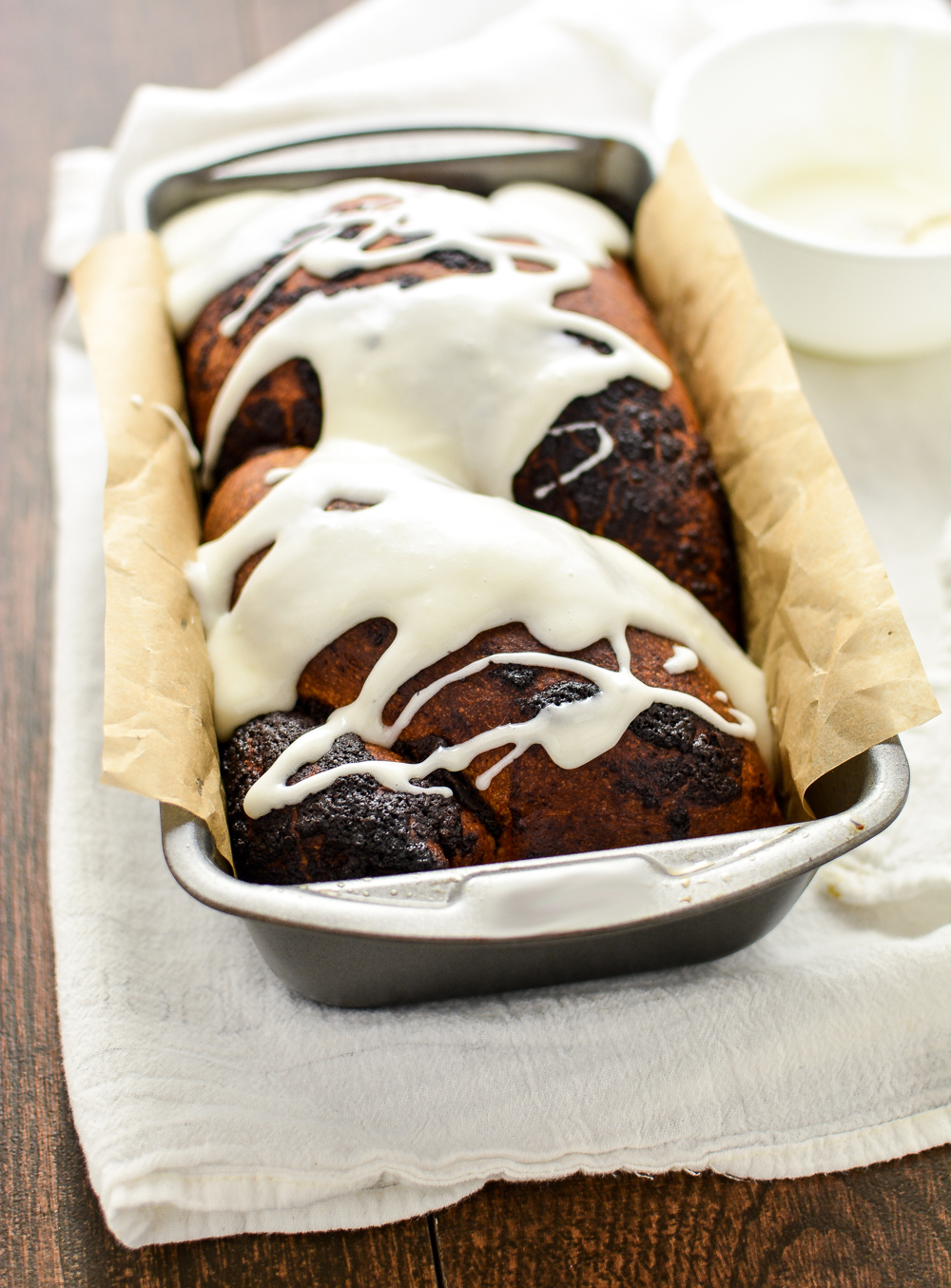 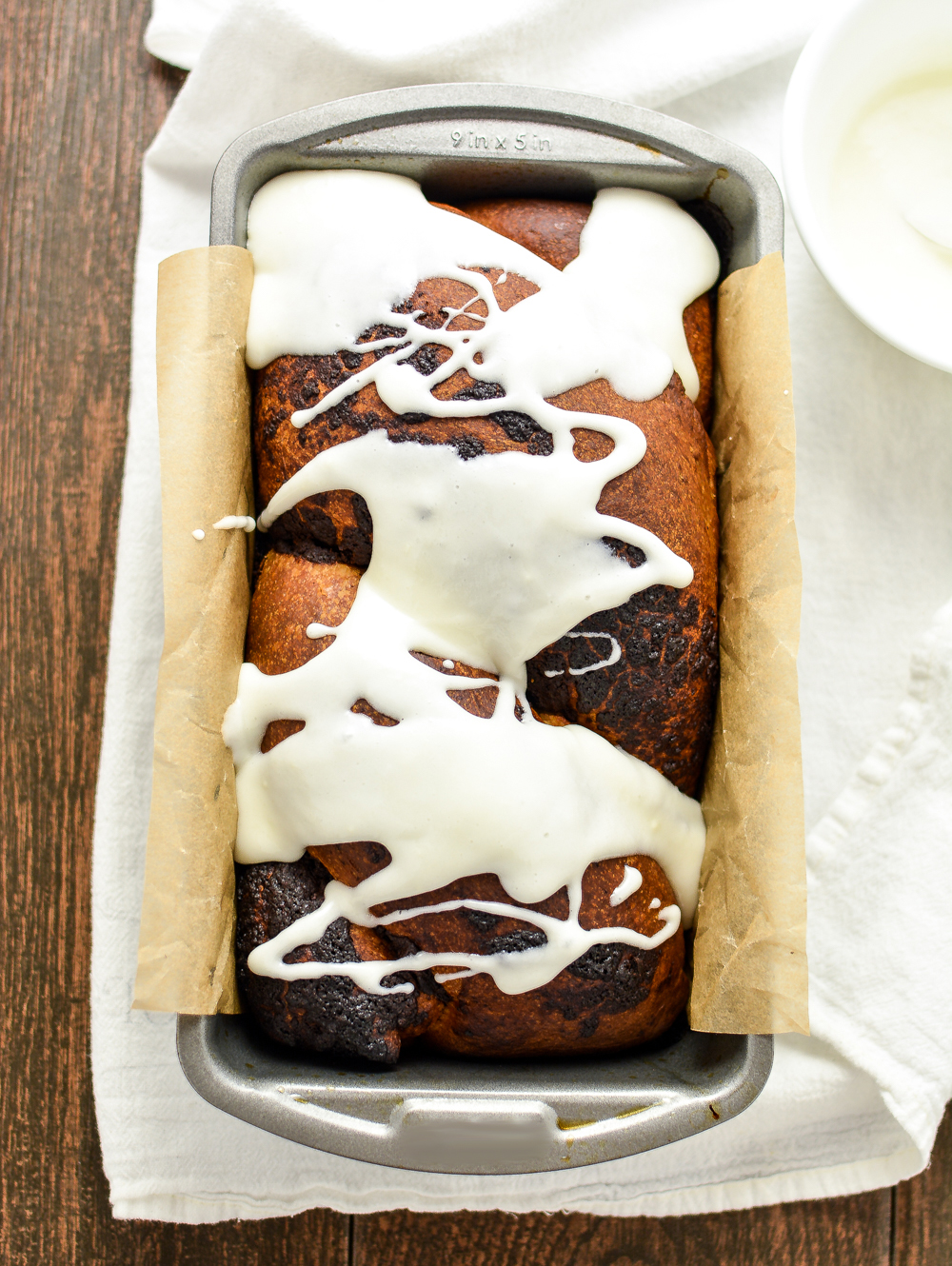 This recipe takes at least 16 hours of inactive time, so this makes this chocolate hazelnut babka the perfect overnight bread recipe. Make sure to plan ahead for this one. This time is reflected in the "total time"

As I was writing up this recipe, I realized that it could really use step-by-step photos. I will update this recipe in the next week or so to reflect that.