Hold the phone! I’ve got you covered for game day, quick weeknight meal, and Friday night pizza party. Like, seriously have you covered. Do you know what Zach and I are OBSESSED with lately?? … Yup, french bread pizzas, and they are pretty much the most amazing invention in the history of mankind. I have been going crazy in catch up mode for Cooking and Beer. I was literally just telling Zach via instant messaging (yes, we still use IM … don’t judge me … you know you do it too my 80s babies), how my eyes are about pop out of my head from staring at the computer for too long, and I would go even more crazy if I didn’t have some easy dinner ideas floating around. So, I would like to introduce you to the french bread pizza: the easiest meal evaaahhhh. 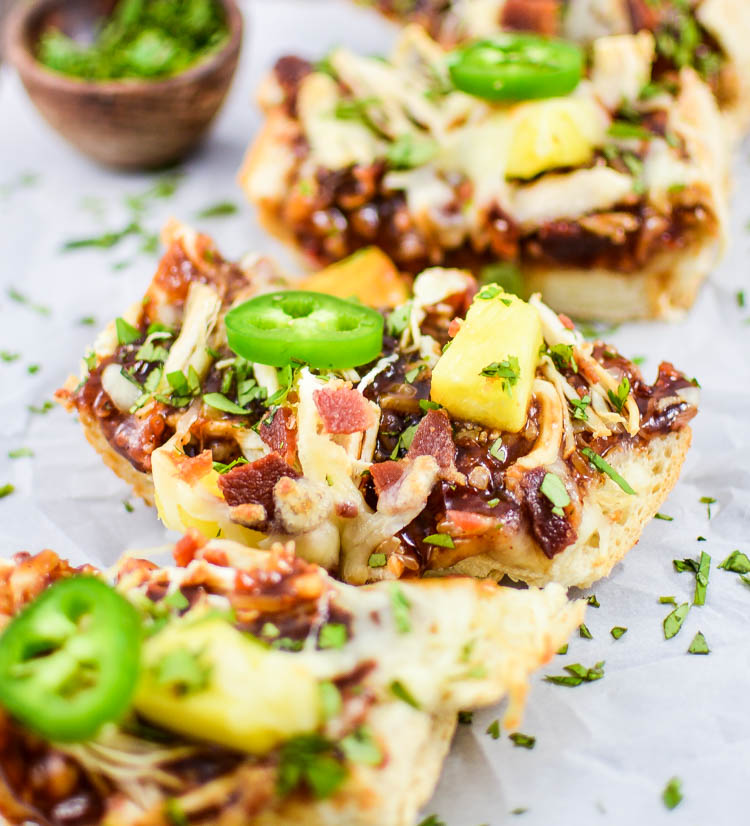 Ok, let’s step back a second. It’s not like Zach and I are IMing one another from across the room. I know what you were thinking. Ha! He is at work. I promise. We aren’t that nuts. Weird, maybe. Nuts, no way.

Anyway, like I was saying before, I have been trying to catch up with Cooking and Beer stuff ever since the holidays ended. I’m sure most of you guys can relate. Transferring the site over to a new server is never easy. Keeping up with recipe trends can be daunting, and sometimes the old noggin’ just runs dry. I’m pulling through for you guys though. I will be escaping from my computer as soon as I’m done writing this post however. ;)

I still love you though. xo

So let’s talk about these bbq chicken and pineapple french bread pizzas. Don’t worry, I’m attempting to perfect photographing them. These photos weren’t my favorite, but I couldn’t not post the recipe because it’s just that great. I love that I don’t have to make pizza dough, buy pizza dough, let pizza dough rest, knead pizza dough. Don’t get me wrong, there is nothing like a perfectly balanced pizza dough of crisp softness. You know what I’m talking about, but sometimes, I just want super easy, and it doesn’t get much easier than this.

A loaf of french bread (you can scoop out the bread from the center if you wish) is cut in half lengthwise. You top it with an easy sweet chili bbq sauce, chicken breast, bacon, pineapple and cheese of course. Bake these babies in a 450 degree F oven until gooey and melty. These french bread pizzas are the perfect appetizer for game day or a quick weeknight meal.

Recipe and beer pairings are below! I hope everyone has a great day! xo 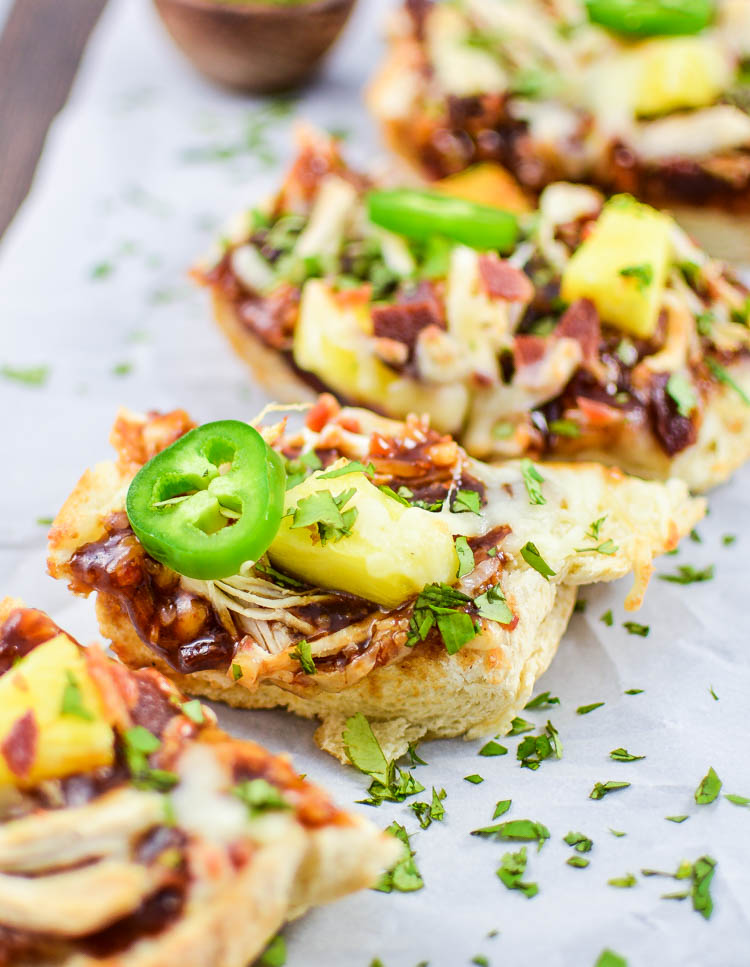 Beer Love
A slice of pizza and a crisp and refreshing pilsner is definitely one of my go to pairings. I don’t pair with pilsners too often, but when a lighter dish or a slice of pizza is involved, I really gravitate towards them. Pilsners tend to be well balanced in their hoppiness and maltiness which makes them great for a pizza that has a ton of different flavors going on. A beer that is too hoppy, and you may lose the sweetness from the bbq. A beer that is too malty, you may just drown in too much sweetness. That’s why I love a pilsner for these bbq chicken and pineapple french bread pizzas.
Crooked Line’s Imperial Pilsner: Tilted Smile
Great Divide’s Nomad
Oskar Blues’ Mama’s Little Yella Pils
Troeg’s Sunshine Pils
Don’t miss a post! Follow along on social media!
FACEBOOK | INSTAGRAM | PINTEREST | TWITTER | GOOGLE+
BBQ Chicken and Pineapple French Bread Pizzas