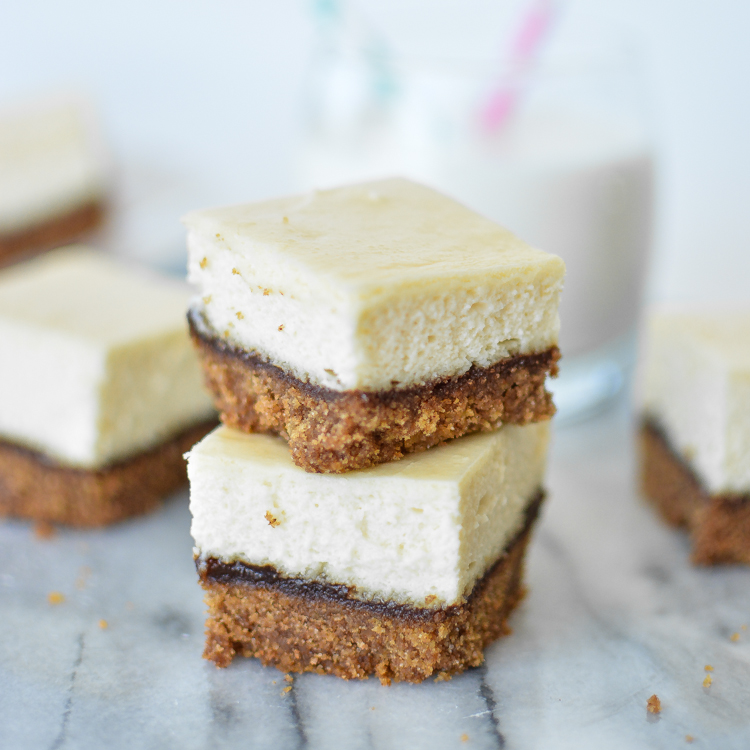 I know what you are thinking. Why am I sharing a recipe inspired by ginger? Ginger is a fall ingredient. I know this. I really do, but I really think this recipe (despite the insane amount of ginger) is really great for summertime. For one thing, it’s chilled. Chilled desserts are great for summertime, and even though you will feel like you are taking a bite out of Christmas when you try one, it’s ok because it will totally cool you down. Besides, they are delicious, so who cares what time of year I post them! These ginger cheesecake bars contain everything that’s absolutely perfect in this world, and it has one of my favorite beer pairings to match.

Can we just talk layers for a moment? These ginger cheesecake bars are all about the layers. The crust is made of crumbled gingersnap cookies and cinnamon. It is then topped with a filling that will melt your heart and your finger tips if you touch it when it’s hot. Don’t touch it. ;) It is a mixture of ginger, sugar, butter and more. The top layer is everything you crave in cheesecake and more. Crystalized ginger is folded in at the end, and it gives it a most-necessary pop of flavor.

Yes, there is a ton of sugar in this recipe.

Oh right, there is also a ton of butter in this recipe…Followed by a ton of cream cheese.

You are allowed to splurge every once in a while. Seriously, it will all be ok.

So how was everyone’s weekend? We have hit a trend here in Colorado where it’s absolutely GORGEOUS during the week, and crap during the weekend. Seriously, I think this past weekend dropped 20 degrees and rained the entire time. I woke up this morning and there wasn’t a cloud in the sky. At least there is some inspiration to get some work done, besides the fact that I would rather be basking in the sunshine. :)

Woohoo. My favorite part of any blog post: THE BEER PAIRING!

Beer: Avery’s Anniversary Ale: Twenty One
Brewed By: Avery Brewing
Style: Imperial India-Style Brown Ale
ABV: 8.7%
Description: I find myself extremely lucky to live just down the road from Avery. It’s one of those breweries I have a love/hate relationship with because I go there and devour everything they have on their menu (because it’s all just so spectacular), and then I DO NOT feel so hot the next day. Ok, so maybe this is a love/love relationship. Who is really keeping track anyway? It’s so worth it because they always have something delicious on their menu. I really love their most recent Anniversary Ale: Twenty One. It’s an Imperial India-Style Brown Ale, and I can almost guarantee you’ve never had anything like it. I chose to pair it with these bars because of the amount of flavor this ale contains. It’s hoppier than you would find in most brown ales, but also has a touch of chocolatey sweetness. This is why I’m so in love with it. It really compliments these bars and tones down the sweetness just a bit. If you can’t get your hands on this beer, try another brown ale or try a stout of some kind. Enjoy!

I hope everyone had a great weekend! Here’s the recipe!