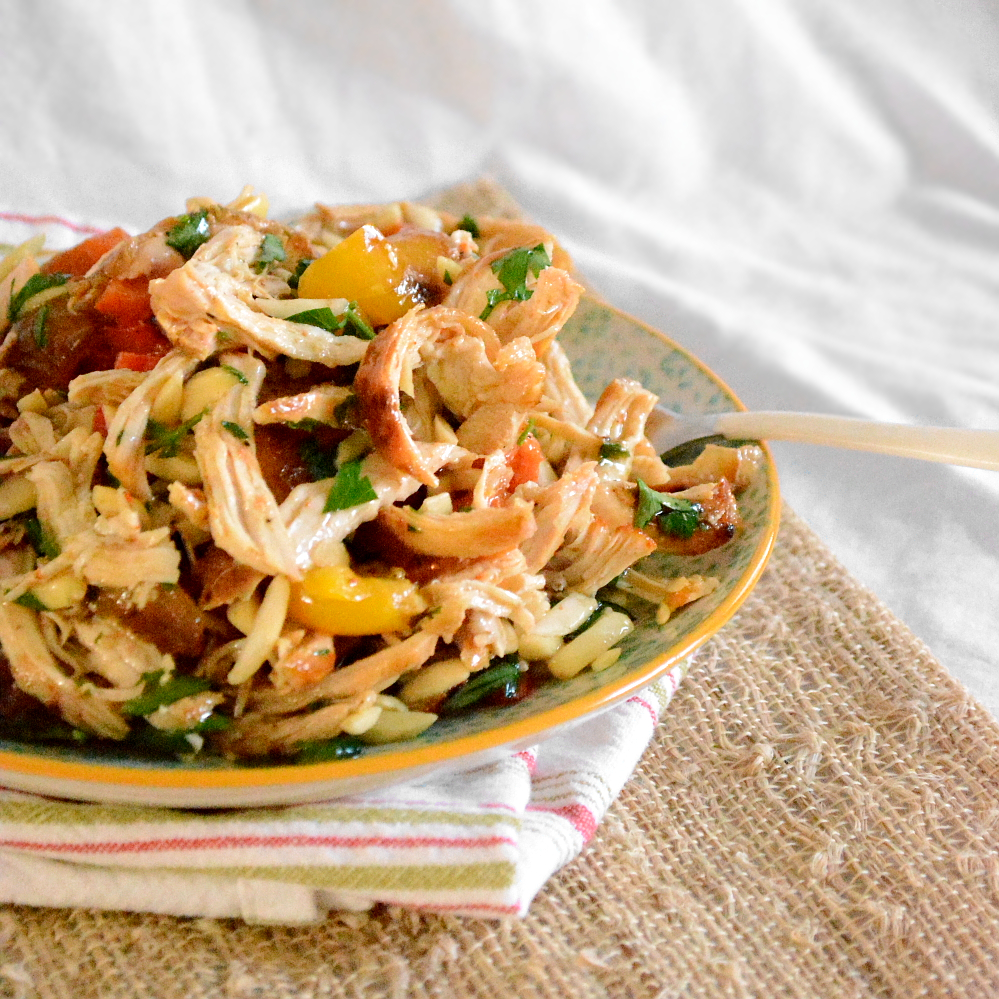 I’m pretty sure this is the most delicious chicken salad I’ve ever made. What makes it so super awesome is that it is so versatile! I love it partly because I love chicken salads, but I also love it because it’s so light! Who knew that you could make chicken salad light? I’ve always been a big fan of the chicken salad that’s tossed with a mayo-like dressing. I’m sure that this is the chicken salad recipe that most people are familiar with. I’ve made this type quite a few times, so I decided to lighten it up this weekend. This chicken salad combines some of my favorite flavors, and these flavors just happen to be Italian-inspired. Roasted bell peppers (red and yellow) make this salad shine. It is tossed in a light and refreshing garlicky, lemony vinaigrette. It’s great on lettuce, tortillas or sandwich rolls; and it’s even better all by itself. Give this recipe a try sometime soon! It will keep for about a week and is perfect for on-the-go lunches!

Roasting peppers is so rewarding. Well, maybe I’m exaggerating just a bit, but I find it extremely rewarding. It’s so easy, and adds such a depth of flavor to some of your favorite dishes. We roast peppers a lot, and I usually do it on the grill. I find this is the easiest, quickest way to get a good char on it. Some get afraid when they see that skin turn black. I’m telling you that this is exactly what you want. Don’t let this scare you! If you don’t have a grill, a cast iron grill pan also works great. And if you don’t have a cast iron grill pan, the broiler will work great as well.

If you plan on roasting the peppers under the broiler, I would suggest lining a lipped baking sheet with foil and placing the peppers on top. It is very important to rotate the peppers (whether you are using a grill or the broiler) once they start to blacken. You definitely want them to char evenly. Keep an eye on them!

So, who knew that Bear Republic released Cafe Racer 15 in the bottle?!? I certainly didn’t, and this came as a huge surprise when we saw it in the liquor store. We obviously had to pick up a bottle, among the other bottles we had collected on that trip (we tend to collect a lot of beer on these little liquor store runs — don’t judge). We LOVE this beer. It’s a Double IPA, which is awesome. It’s Bear Republic, which is also awesome. We love this brewery, and we are headed to the San Francisco area in just a couple of months. It will definitely be a necessary stop on our trip. This beer pairs very well with this chicken salad. I may have mentioned that I, personally, love IPAs with Italian foods. Especially, when those Italian foods have a little bit of a kick. This beer is smooth and refreshing and surprisingly “light-tasting.” Give it a try since it’s now in the bottle! Woo!

I hope everyone is surviving the week! Have a great day everyone! 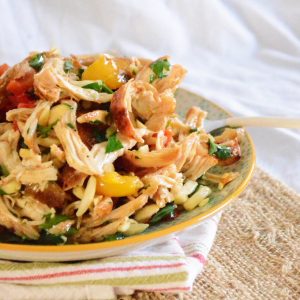 Put a fun spin on chicken salad! This recipe gets rid of the mayo, adds Italian flavors, and lightens up with a simple vinaigrette!