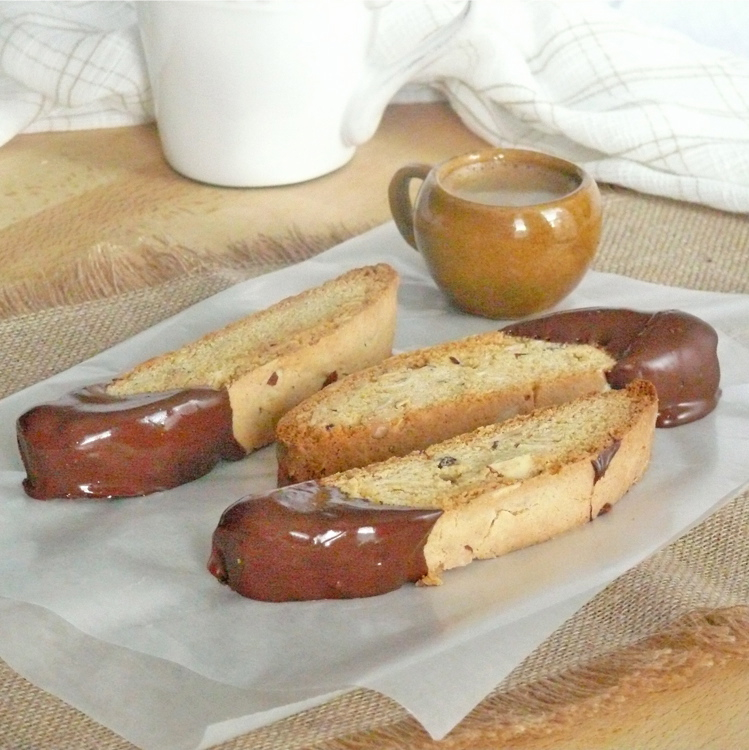 So our air conditioner broke, and it sucks. I had a conversation with my mom this morning about how to keep the house cool until it can be fixed, and she 100% advised me not to turn the oven on. Well, moms know best for sure, and I should have taken her advice. The problem is that Zach and I really really wanted some biscotti. I also really really wanted to write about making biscotti. Instead of taking my moms advice, I turned the oven on anyway. Was this a bad move or no? Well, I don’t think I would have turned the oven on if I were making anything other than biscotti. * I may regret this later. I will keep you posted. * Anyway, if ya’ll don’t remember, a couple of months back we took a stab at a chocolate biscotti and it came out terrific! If you don’t remember (this makes me sad), then you can check it out here. It went over so well, that it disappeared in just a couple of days. Zach asked me to make it again, and he didn’t have to ask me twice (despite the conversation with my mom about keeping the house cool). This time we went the vanilla bean and almond route. Don’t worry. I didn’t forget the chocolate completely. Anything dipped in melted chocolate is ok in my book. Of course, it is anise-free. Ew. I can’t stand the stuff, but it certainly does not lack in flavor. It is filled with the aromas of vanilla and almond. It is just spectacular.

I am seriously watching the temperature rise on the thermostat. Yes, mom you were right. At least we can sweat and eat biscotti at the same time! It kind of makes the whole ordeal ok!

Anyway, if you’ve never made biscotti, this is a great recipe to get started on. It’s really just a glorified cookie that’s baked twice, and your options are limitless on how creative you can get while making it. Biscotti is also great if you plan on storing it for a couple of days. It takes a long long while for it to go bad and it travels very well. Although, if you do plan on traveling with it (in the blistering heat), I suggest skipping the chocolate dipping part. Also, if you are an anise fan, you can certainly add it into the mix. For reasons that I may have mentioned already, we skipped it.

As soon as I hear the word “vanilla” only one beer comes to mind, and I know that I’ve already paired with it before. I can’t help it. You really can’t go any other way than Stone’s Smoked Porter w/ Vanilla Bean. This beer is absolutely the perfect dessert beer. It is so smooth with just a hint of sweetness. The vanilla is there, but is definitely not overpowering. It’s distributed just about anywhere, and if you are out to pick up a bottle, grab the chipotle version too. It’s equally satisfying!

Well, I know I’ve been absent for a few days…had to get all of my ducks in a row. You know how it goes, right? Zach and I (and a good friend of ours) are getting ready to head out into the wilderness for 4 nights next week. Don’t worry, I have plenty of yummy recipes coming your way before we leave. I hope everyone had a great weekend. Enjoy your Sundays!