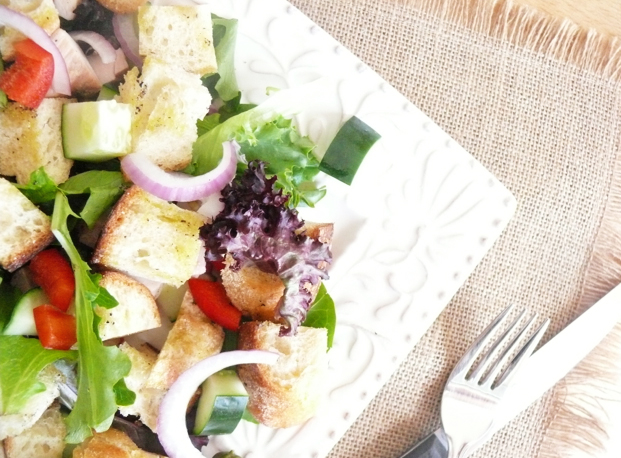 I’ve been wanting to make a panzanella salad for a while now. Every time I see someone making it on a cooking show or read about it in a cook book, I get the urge to make one. Unfortunately, an hour goes by and I forget about it all together! Fortunately for us and all of you, I remembered this time and prepared accordingly. Salads are of course a great way to highlight all of the great fruits and veggies of spring and summer. That’s why they are so diverse. The sky’s the limit on what you can actually add to a salad. I decided to go ahead and do that with this recipe. A true panzanella salad (modern day) is really just a combination of stale bread, tomatoes, and maybe a dash of olive oil and basil. That’s pretty much it. Sometimes an onion gets thrown in there. It just depends. You don’t often find a load of greens in a true panzanella salad, and you also probably don’t find 1/2 a dozen different veggies in one as well. That’s where we went off course a bit. Not that there’s a reason to complain. The salad was absolutely delicious. I promise.

A panzanella salad requires the use of stale bread. I think this is to give you the “crouton” affect. It’s often tossed in some olive oil and softened up a bit. Zach isn’t a huge fan of mushy food…especially soggy food. In this recipe, I took a day old boule and “crunchified” it a bit in the oven to satisfy everyone. I thought this was a pretty successful plan; although maybe not the most traditional of plans. Instead of waiting for the cubes of bread to get brown, I just baked them for about 5 minutes so that the outside was a little bit crunchy, but the insides were still kind of soft…kind of like stale bread. I like to call these cubes “almost croutons.” Seems to fit don’t you think? I went a little overboard on the amount of bread, but I think it was totally necessary to get that “panzanella” feel. If you don’t want go on a carbo-load binge, you can tone down the amount if you like =). We just really really like bread.

For this recipe, we decided to go with chicken, which was a fabulous plan. Salads are a great use of leftover meat. I know I may have mentioned this in the Crispy Duck Salad post, but cold meats are totally ok for a salad. If you want to use fresh, I would definitely go the seafood route and try out some sea scallops or shrimp. Seafood is great in panzanella salads. We would have totally gone this route if we didn’t have so much leftover chicken!

A great marinade if you want to use scallops or shrimp:

Whisk all of these ingredients in a small bowl. Marinate the scallops or shrimp for about an hour in the refrigerator. Then cook to your hearts desire. I find that skewering the scallops or shrimp before you add teh marinade to be a pretty good idea. Then grill them on medium-high for 2 minutes on each side.

For the beer pairing, we decided to go with Great Divide Brewing’s Belgian-Style Ale: Hades. It’s a FANTASTIC beer. It is a crisp, Golden ale and a perfect summer brew. It has a nice spice-like factor and is so flavorful. It is a true enhancement to this salad.

I’m craving breakfast, so we are totally making a breakfast pizza for dinner and we are super excited about it =). It’s almost the end of the week everyone! Hold on tight!