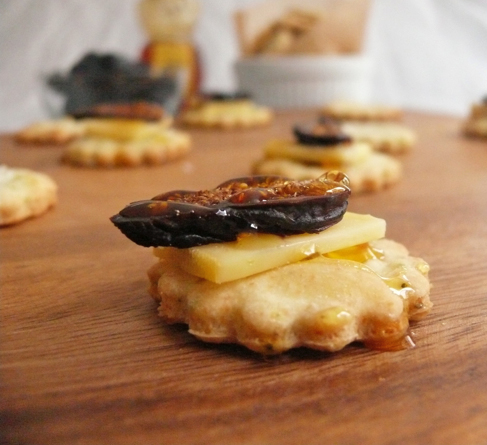 Let’s just say I have tried to make crackers before, and I’ve been completely unsuccessful. I actually think I may have burned a batch at one point. I decided to give it another go. I was a bit more successful this time around. This time I decided to incorporate some more butter and cheese and make them a little more gourmet than your average cracker out of a box. You would be surprised at how far a cracker dough can go and how much you can get out of one batch. I do believe this will be a new route Zach and I will be taking, as we try to avoid buying boxed crackers, and end up just making our own. More satisfaction will come from it in the end, I’m sure of it =).

What I love about crackers is their diversity. You can literally do just about anything you want with them. You can top them with spreads, jellies, veggies and more. You can put them in soups; and you can also pulverize them and turn them into a crust. Your options are almost limitless.

This time I decided to top them with a couple of different ingredients. For the first batch, I topped with a piece of gouda and diced tomato, avocado and cucumber. For the second batch, I wanted something super sweet to counter that salty cracker. I topped with a slice of gouda and then added a sliced fig and a drizzle of honey. It was sooooo delicious: obviously the perfect midday snack.

The only thing I would do differently the second time around is double the batch so I can store some for later on in the week. This batch is already almost gone! Making crackers are a great way to use up some of those ingredients that you have fear of going bad sooner rather than later. You can make them as herby or as cheesy (or both!) as you like. That’s what’s so great about them! Next time, try making a batch of crackers instead of buying a box of them!

For this beer pairing, I couldn’t think of anything better than an IPA (because there is IPA in the crackers of course!). I had a bottle of Bridgeport’s IPA so I decided to use that. It was a great fit: perfectly crisp and hoppy: perfect with this cracker recipe. Any great IPA will do =).