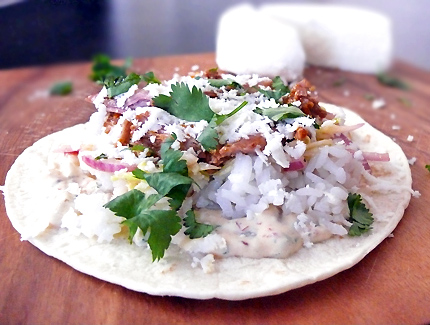 Sometimes you just crave a taco, and if you’re Zach or I, you crave tacos at least once or twice a week. We’ve tackled the fish taco, which is always a winner. We’ve also outdone ourselves with a buffalo chicken taco that was absolutely to die for, but we love buffalo chicken, so of course we almost died for it. We’ve deconstructed tacos (or enchiladas, but whose keeping track) and made a sweet potato tostada, but we have had yet to whip up a pulled pork taco. Oh, and then there’s the duck taco, that could be just around the corner because I forgot how much we love duck, but anyway…I didn’t just want an everyday BBQ pulled pork taco. I wanted a Mexican-style taco packed full of sweet and spiciness. In this recipe, I took your traditional BBQ pulled pork taco and took the BBQ right out of it. I wasn’t mad about it, and neither was Zach. I’m just happy that there is enough left over to have it for a second night!

I know I say this a lot, but tacos are so simple and so affordable. If it’s just the two of you, like in the case of Zach and I, you could literally eat tacos for a week with the amount you can make with so little money and so little time. On the other hand, it’s the perfect weeknight dinner idea for a family of 15 for the same reasons I gave before. With this recipe, and like most other pulled pork recipes, the pork needs to cook for a long time. Pork shoulder is super tough but super tasty. It needs to cook low and slow to really get those great flavors out. The slow cooker is the perfect kitchen tool for this, but a dutch oven will work just the same and will actually work a little bit faster if you’re in a time crunch. It’s the perfect dish to start before work and come home to a home smelling of delicious aromas. We cooked ours on the highest setting for 4 hours and this worked just find, by the end of the 4 hour mark, the meat was falling apart, which is exactly what you want in the end.

This dish is spicy, but not knock you off your feet spicy. The spiciness can be altered by adding or reducing the amount of chipotle peppers, chili powder and cayenne. It won’t destroy the dish either way. It will however make it more specific to your tastes. The slaw adds a bit of crunch that’s totally necessary for a taco. I’m also remembering now as I write this, that I completely forgot to put the fried onion strings on top of our taco. This isn’t in my recipe (because I forgot), but if you’d like to add to your taco, I think it would be the absolute perfect little touch.

I have a feeling some of you are wondering what a “remoulade” actually is. This is the mayo-like sauce we created for the base of the taco. Developed in France, a remoulade is usually mayo-based and is much like an aioli. It often has pickles incorporate into it which may make you think of a tartar sauce. In fact, it actually is much like a tartar sauce, but it can be developed in really any way you wish as long as mayo and the occasional pickle is involved. Curry remoulades are pretty popular these days. It’s really great with fish, and especially our tacos =).

At first we had no idea what to pair these tacos with. Usually if it’s a Mexican-style dish, we tend to pair with a pale ale or an IPA. This totally gets boring after a while. We discovered last night that we have had yet to pair a dish with a barley wine. Well at least I think I haven’t. Who knows these days. I’ve been forgetting a lot of things here of late. Anyway, we popped open Stone’s Old Guardian Barley Wine last night and almost forgot the glory that comes with drinking a barley wine! It literally smells like vanilla (to me at least it does) and tastes like heaven. It pairs so spectacularly with this dish that in the end I was so so so sad dinner was over. I hate when that happens. Beware though this beer is high in alcohol content so don’t go drinking the whole 22 ounce bottle by yourself. You may just be on the floor by the end of the night, and if you’re feeling extra ambitious try the oak-smoked version. We have yet to pop open ours, but are excited for what it has in store…and if you are feeling extra, extra ambitious, buy an extra bottle and let it age for a year or two. It ages magically. Oh…and if you are feeling extra, extra, extra ambitious, buy yet ANOTHER bottle and let it age for even a few more years. It will age even MORE magically =).

Tonight I’m making my own version of biscotti without the anise (because I truly hate the stuff). It will be perfect with our morning lattes and a great start to the day. I’ll show you how to make these little guys tomorrow. Good day everyone!