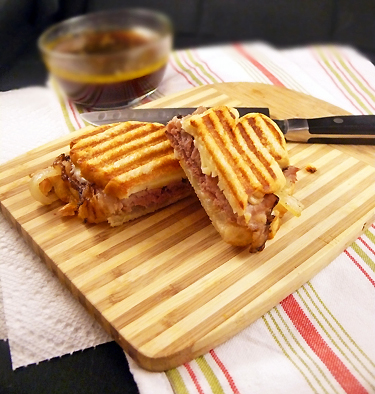 Did you know that a French Dip isn’t French at all? I certainly didn’t. It actually comes from Southern California. It’s kind of like Ciopinno. For the longest time I thought Ciopinno came from Italy. Nope. A restaurant from San Francisco definitely takes the credit for “inventing” it. This just goes to show you how influenced we are by other cultures and their cuisines. I don’t mind. They are all delicious flavors. Ciopinno is in fact one of my favorite dishes on the planet. French Dip sandwiches are another dish I couldn’t live without. I went with a stout au jus instead of your usual. It…was…delicious.

Sandwiches are easy. Well most sandwiches are easy. French dips are definitely easy, but you could make them more time consuming if you wish. Zach and I have a problem. We always make too much food, so we end up eating the same thing for 5 days straight. I’ve really been trying to cut back lately and make the portion sizes much smaller. It’s hard with two people to be honest, but I think I’m getting there. That’s why I didn’t roast a cut of beef. I did take some short cuts with this recipe. You could certainly roast a cut of beef to perfection and slice it thin. This takes time, and I don’t think it’s necessarily a horrible idea. It’s actually a great idea, if you have the time. My first short cut with this recipe was with the roast beef. Yes, I bought a deli-style roast beef. This isn’t necessarily a bad thing. Just make sure you buy the good stuff. In this case, the more you spend, the better it usually tastes.

My second short cut was the bread. I did not make my own bread. I have before and my French Boule recipe is a great one if you are looking to make your own. I ended up buying baby boules instead. Well actually Zach bought the baby boules. I wanted a normal sized boule, but he came back with babies. It’s ok, I just made smaller french dip sandwiches =). This is a short cut you can also take if you don’t feel like whipping up some fresh bread. I won’t tell if you won’t.

So let’s talk beer. Well of course I had to go with a stout since I made the au jus with one, which by the way was absolutely delicious and I will never make a homemade au jus without a stout ever again. But anyway, if I were you, I would go with Lefthand’s Milk Stout Nitro.This is a delicious brew. You get hints of coffee, vanilla and a subtle brown sugar taste. It pairs with the complex flavors coming out of the au just and the sandwich itself. Also, Lefthand is awesome. I find that they are starting to distribute further and further. Many of you should be able to get your hands on one of their beers.

So my ice pop molds came in. Woo! I start the process tomorrow and am super excited to share some great recipes with you. Have a great night everyone; and if you are in the midwest, have fun in the snow!