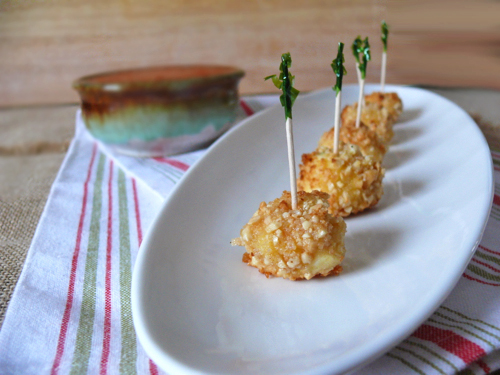 Everyone loves a good mozzarella stick. I know that I do…when they are prepared correctly. Half of the time you can tell when they are frozen, and the other half of the time the restaurant totally fries them too long and they get hard in the middle. That’s the absolute worst. It’s so much better when they are gooey and warm in the middle. This recipe is a variation of my Pine Nut Crust Goat Cheese Balls which I made a couple of weeks ago to compliment our Grilled Marinated Flank Steak Salad. I really wanted to make a mozzarella stick for the game this weekend, and decided coating them in nuts would be a ton more fun! Cashews and pine nuts come together to make an amazing crust. These little beauties are so delicious, and they’ve brought a whole new meaning to the term “mozzarella stick” (in fact they are actually a ball, but whose keeping track). Don’t quote me on this, but I’m pretty sure that if you put these little guys out on Sunday, they will be gone in seconds. Well sure, ok, you can go ahead and quote me.


One of the things I love about this recipe is with a substitution here and there you can make them gluten-free in no time. I know many of you are tackling this diet, so I thought I’d help out a little. In this recipe, I decided to go all gluten-free; right down to the almond flour and gluten-free bread crumbs. It’s ok if you don’t want to go this route, just substitute back in AP flour for the almond and panko bread crumbs for the gluten-free. It’s very difficult to tell the difference when you are making these. I’ve done both when I’ve made my goat cheese balls, and they tasted exactly the same. If anything, the almond flour adds a bit more of a nutty flavor, but it’s something I’m sure most of you won’t even notice.

Of course we had to go with a “nutty” brew for this beer pairing. We want to intensify that “nutty” taste! We decided to go with Tommyknocker’s Imperial Nut Brown Ale. Part of the reason we went with this is because it’s “imperial.” There are so many great nut brown ales out there. Sam Smith has a great one, as does Alesmith. You will have no problem getting your hands on one. What’s so special about Tommyknocker’s Nut Brown Ale is it’s intensity. It is so full of flavor and complexity, that it’s the perfect accompaniment for this appetizer. It’s also 9% which always adds a little fun into the mix. =)

So, I still haven’t gotten quite used to this Colorado weather. First off, the weather forecasts in the area are just absolutely horrible. It would be difficult to get the forecast right in this part of the country. I understand the issue. There is such a great change in temperature from day to day, it would be almost impossible to predict mother nature! We were having pretty great weather: temps in the 50s and 60s and then BOOM 2 days ago, mother nature decides she’s going to dumb 6 inches of snow and drop the temps below freezing again! Don’t get me wrong, I love snow. I just wish she would make up her mind! I bet you are wondering what the heck this has to do with mozzarella balls, and really it has absolutely nothing to do with it. I just wanted to vent for a minute. However, having to be inside all of the time does add to my influx of cooking!

With that being said, Zach just got back from his run, and it looks like he just came out of an icebox. His exact words when he walked in the door “stupid weather.” =) See, I told you so! I should probably go make sure he’s still alive. Have a great day everyone!