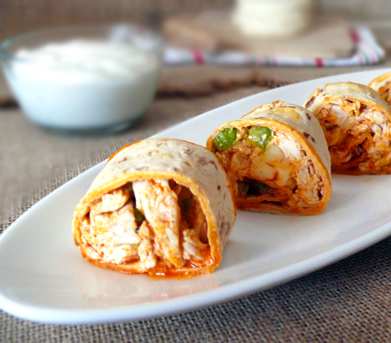 Well the Superbowl is just around the corner, and I wanted to share with you some of the appetizers that I plan on making this Sunday. Even though my beloved Steelers are not in it this year, I still cherish each and every moment of the football season. It’s so short! You have to stock-pile up some football fun before you have to wait 7 months for it to begin again! Tragic, just tragic. I’m starting off with my buffalo chicken roll-ups. I know that wings are a big must on Superbowl Sunday, and I’m not saying to not make them. You can go ahead and make both if you’d like! I like the idea of providing a healthier option to a favorite, and that’s just what these Buffalo Chicken Roll-Ups bring to the table.


I’m not going to lie, you are still dealing with a ton of butter and hot sauce in this recipe. That is one part I did not alter (and I didn’t want to alter – that’s the best part!), but instead of using a traditional wing, I chose to just use boneless-skinless chicken breast (baked and not fried). What’s so great about these roll-ups is that you don’t have to take a bite of a wing and then a bite of celery. It’s all mixed into one! They aren’t as messy, but are still classified under “finger foods.”

It’s the start of the New Year, and everyone is watching their weight and exercising more. I feel like the Superbowl is the beginning of the end for most. It’s like you were so on top of things until this first weekend in February and then you were like “screw this, it’s the Superbowl. I’m going to splurge.” Then the next weekend it’s something else, and the weekend after that it’s something else. Before you know it your average weeknight dinner consists of boxed macaroni and cheese with hot dogs cut up in it. It’s ok, it happens to the best of us. I feel that this recipe allows you to splurge without going overboard.

The best part about this recipe is that it’s EASY. No having to drag out the deep fryer. No having to wait for that oil to reach the perfect temperature in your stock pot. You don’t have to order out to make this year’s Superbowl party a spectacular one. You also don’t have to fork out a ton of money, because let’s be honest it costs a TON to have a party when you have to have it catered. No fun, no fun at all. These roll-ups can be prepared ahead of time because they are just as great cold as they are warm.

What’s a Superbowl party without beer?! And what’s cooler than pairing all of your Superbowl dishes with beer!? I know I would love it if I went to a party and they had beer pairings. For this pairing we decided to go with Upslope’s Pale Ale. Spicier foods can be harder to pair with sometimes because there are so many flavors going on in your mouth. You don’t want a super heavy pale ale either, which is why Upslope’s Pale Ale is perfect. This may be hard to find on the East coast, but don’t fret there are more pale ales on this planet then there are rocks. Visit your local liquor mart and find something special.

We will have something fun each day this week in preparation for Sunday. Enjoy your Monday everyone and we’ll see you tomorrow!