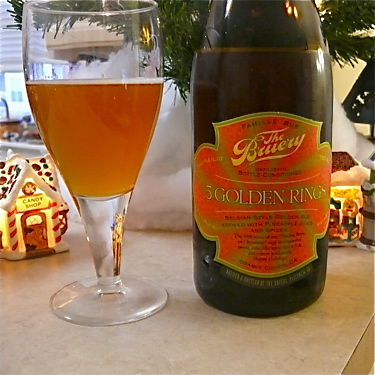 It has become a holiday tradition to seek out the latest release in the Bruery’s 12 Days of Christmas series. It feels like it was just yesterday that I picked up a bottle of Partridge in a Pear Tree at a Bevmo in Pasadena, California. At the time, The Bruery was in its infancy and unless you lived within 50 miles of Orange County, you would think that I was misspelling the word “brewery”. Even the following year, with the release of Two Turtle Doves, the Bruery was still small but growing, gaining a large following amongst the craft beer drinkers of California. Today, four years after the release of Partridge in a Pear Tree, you can get the Christmas beer release in just about every state and The Bruery is not a household phrase (at least amongst those that enjoy and appreciate quality beer).

I still have that bottle of Partridge in a Pear Tree. I have never opened it and this I cannot tell you what it tastes like. I have seen bottles sell on Ebay for $300-$400. But, I will never sell it. Nor will I ever trade it (unless someone wants to trade a new car for the bottle). Instead, I will hold onto that bottle until the release of 12 Drummers Drumming. Unfortunately, I drank my one and only bottle of Two Turtle Doves last year and am currently seeking out a replacement bottle (if you want to trade, contact us). I do not regret opening that bottle as it was simple mesmerizing. There is something special about chocolate and dark beers; they are just meant for each other.

Three French Hens is arguable my favorite release from the series thus far (especially the barrel aged version). And, we are fortunate to have two bottles remaining! Last year’s release, Four Calling Birds, at first did not appease me. However, after allowing the beer to age 6 months or so, the flavors mellowed out quite a bit and the beer become quite wonderful. Our last bottle is sitting in storage (beer storage that is). We have multiple levels of beer storage at the Lebo-Sulia household. In fact, there are beers stored in 6 locations at all times (you never know when you are going to be stuck in the closet and need a beer). Actually, the reason for the multiple locations is simply that we do not have the space for all of the beers (about 300 bottles), nor do we want to expose them to drastic temperature changes. For now, they all sit in their designated locations until they become the chosen ones.

Now, back to the main point here, 5 Golden Rings. I must say, when I discovered that it was going to be a spicy golden ale with pineapple, I was super excited to get my hands on a few bottles. Thanks to our friend Pete at Superior Liquor, 6 bottles were set aside for us to pick up once we returned from our Thanksgiving nightmare, I mean holiday vacation. The folks there are fantastic and we very much appreciate the work that they do (i.e., bringing us awesome new beers to try and enjoy). Unfortunately, I came down with a nasty head cold and we were not able to enjoy a bottle that first night.

On Sunday, we finally opened a bottle of 5 Golden Rings. And, just as the name proclaims, it has a brilliant gold color. The aroma is quite spicy . . . notes of cinnamon and allspice are quite prominent. 5 Golden Rings, at first, tastes a lot like a quality spiced golden ale. The cinnamon, allspice, and ginger meld well with the beer by themselves. After the initial smack in the face by the spices, the mellow, sweet pineapple flavors come through. This beer is quite complex; the flavor profiles is constantly changing as you sip the beer. 5 Golden Rings is fantastic. I cannot wait to open another.

However, given the beer’s unusual ingredient (i.e., pineapple), pairing it with food is quite challenging. I would definitely drink 5 Golden Rings with either a light fish dish or a spiced desert. These two will help bring out either the fruitiness or the spices, respectively. If you want to take 5 Golden Rings one step further . . . maybe you can work it into a pineapple upside down cake recipe! Oh yea!

Chances are your local craft beer market will get a case or two of 5 Golden Rings this holiday season. But, do not waste time as these guys are sure to fly off the shelves. Cheers.