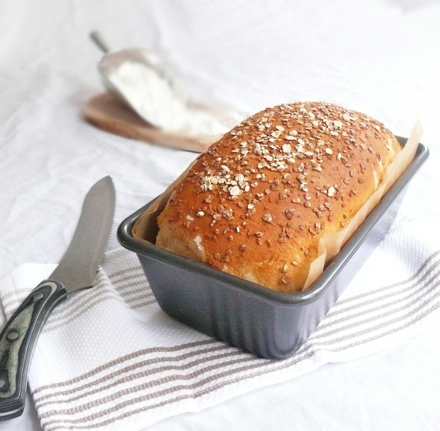 Lately, especially since we are moving in a little over a week, I’ve been trying to make things that aren’t going to go to waste. It’s hard with two people to make the right portion amount, and it’s especially hard when you are packing things up and getting ready to move. We eat a lot of bread. I mean, A LOT of bread. I certainly don’t mind it. I could live off of bread if my body would allow for it. Today I decided to make some good sandwich bread: nothing over the top and out of control, but a good and hearty country white bread with a superb crust. This country white bread recipe with oats and honey is perfect for any time of day, and the subtle sweetness of the crust goes perfect with the savoriness of your favorite sandwich components.

I love white bread. Yes, I am one of those. No, I’m not talking about the store-bought, pre-packaged cheap bread that has absolutely nothing to it: the kind of bread that you can literally squash between two hands and it would disappear before you even knew it. No, not that kind…I’m talking about homemade, country bread: dense and gorgeous and so incredibly versatile! In concept, country white bread should be easy to make. Not a whole lot of ingredients goes into it; and besides the rising part, it shouldn’t take very long either. It takes a little bit of kneading, but it’s not out of control like some other breads tend to be. If you have a mixer with a dough blade then you’re golden. You really don’t have to do anything at all. If you have to actually knead it with your hands, then it can get a bit time consuming. Although, it will taste a lot better if you do it by hand. Trust me! =) Of course, like any other recipe, there are the factors to consider. Take Zach and I for instance, the altitude can cause some things to cook and bake differently than others. Also, there is that dreaded yeast component. Who knows if it’s dead or alive and if it will work exactly how you wish it to work. This can sometimes be the frustrating part of making bread, but in the end it is usually worth it. Then there is that whole cheap oven that I have to use. Don’t get me started on that one. We’ll be here all day.

What I love about this recipe, is that it is so simple yet so delicious. I don’t love oats inside of my bread. If it is a sweet, dessert bread than I can handle it. This is not a knock to anyone who does love it. Zach loves it, so I made a compromise when I decided to make it. Instead of packing the bread itself full of oats, I decided to just sprinkle them on top. You still get that “oat feel” without cramming the inside full of a texture you, or I, don’t necessarily love.

One thing that is great to do with this recipe, is to make quite a few loaves and then freeze them for later use. If you are anything like Zach and I, we go through a ton of bread. Instead of letting it go bad by leaving it at room temperature, it is totally ok to freeze it. Sure, it’s not going to be EXACTLY the same as when it’s fresh out of the oven, but it will certainly save you from buying the pre-packaged stuff or spending a ton on you neighborhood bakery’s loaves (which are still great, don’t get me wrong). This bread is perfect for breakfast with jam, lunch with meat and cheese, or just for use as a late night snack. It’s so cheap to make too!

For this beer pairing, I could think of no other way to go than with an ale brewed with honey. Kind of makes sense doesn’t it? I decided to go with Weyerbacher’s Dark Braggot Ale: Sixteen for a multitude of reasons. It is absolutely amazing. It is an anniversary beer, so it’s super special, and it’s brewed with a TON of honey! It is one of the most fantastic braggots I’ve ever had and deserves to be at the top of any braggot list. Of course we are past the brewery’s 16th anniversary. Actually, we just happen to be past their 17th anniversary, but there is a small chance that it could be lying around somewhere so keep those eyes open! If you can’t find this beer, keep your eyes open for other braggots in your area. They will do just fine.

Since a lot of snow is in the forecast for the end of this week, tonight we decided to make a big pot of sweet potato chili that I hope lasts us an entire week (which it probably will). It’s one of those days that I just can’t wait for dinner, so let the countdown begin!