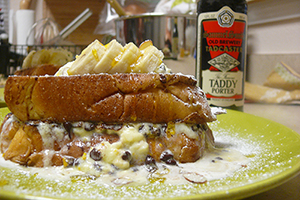 French toast is one of those “breakfast” foods that has the ability to take you back years and years to early childhood, when your mom or dad dipped a piece of day old white bread in a mixture of egg, milk and cinnamon and let it fry on a buttered griddle to get you all set for the day! Throw a piece of bacon or sausage on the side, and you were in heaven! We’ve prepared an elevated, more sophisticated version of that! The orange zest mascarpone cream helps in that elevation but the simple syrup made from orange juice just puts it over the edge.
Now we know this is a breakfast dish, but you all know that we HAVE to pair it with a beer. In this dish’s case, you would have to pair it with a breakfast stout or a sweeter porter. We’re not sure anything else would mesh well. We chose Sam Smith’s Taddy Porter for this pairing, but Founder’s Breakfast Stout would also work really well. It’s robust, toasty flavors compliment this dish very well. The heaviness of the beer compliments the heaviness of this dish, but it’s just sweet enough to not come off too dry and smother the flavors of the french toast.

We hope this recipe takes you back to a simpler time, and we hope you enjoy making it just as much as we did!